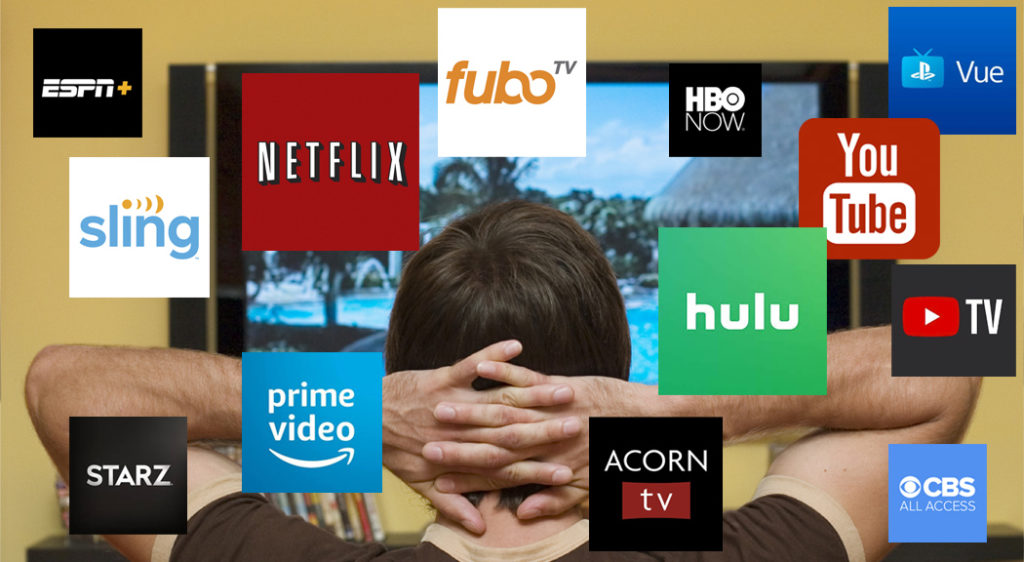 This post is a follow-up to a post from last month where we went through the basics of Streaming Devices — things like Smart TVs, streaming boxes, and other smart devices.  In this article, we are going to cover the services behind streaming — or the places you get the content for streaming.  We hope this helps!

Acorn TV is a streaming service specifically for British TV.  You will find TV dramas such as Doc Martin and A Place to Call Home, mysteries like Agatha Raisin, and many others.  Acorn TV is $5 per month or $50 per year.

If you are already paying for an Amazon Prime membership for shopping purposes, then you already have access to Amazon Prime Video.  If not, you can subscribe to the video-only service.  Amazon Prime is getting closer to Netflix and Hulu with its library of content, making it a great choice for many viewers.  Amazon Prime (with Video) is $119 per year or $13 per month, with free shipping. A video-only subscription costs $9 per month.

ESPN+ is marketed (by ESPN) as an add-on to traditional ESPN content and not necessarily a replacement.  Initially, ESPN+ only had a handful of more niche sports and programs and since has greatly expanded their coverage to include the more popular sports leagues and games.  You should look for devices capable of streaming ESPN (which is not included in an ESPN+ subscription) as ESPN+ is typically not a stand-alone app.  ESPN+ is $5 per month or $50 per year for the basic service. You can pay an additional $25 per month each for the full MLB.TV baseball and NHL hockey seasons.

Sports fans looking for an online alternative may find Fubo attractive.  In addition to more sports than most streaming services, Fubo offers a mix of broadcast and cable channels including CBS, Fox, NBC, A&E, Bravo, FX, Nickelodeon, SyFy, TBA, TNT, and USA.  Fubo includes a “cloud DVR” for storing programs online for later watching as well as a 72-hour “look back” feature that lets you replay most programs that appeared in the previous three days.  While the list of compatible devices is expanding, you will still want to check compatible devices so you don’t end up with devices incapable of working with Fubo.  Fubo is $55 – $75 a month.

Until recently, the only way to get HBO was by also subscribing to a cable or satellite service.  With HBO Now, you can subscribe only to HBO and watch HBO shows and movies online.  With more and more HBO originals and hit shows, that makes a lot of HBO fans happy!  And unlike HBO on TV, you have instant access to any movie or TV show in the HBO library, without having to watch your programming guide for date and time.  HBO Now is available on most devices including Amazon Fire TV, Apple TV, Chromecast, Microsoft Xbox, Roku, Samsung TVs, and PlayStation Vue.  HBO Now is $15 per month.

Hulu is the most direct competitor to Netflix in that they each offer a wide variety of movies and TV shows.  In fact, because they tend to offer different content, many people subscribe to both Netflix and Hulu in order to get access to all of the programming they like.  Hulu has current shows from ABC, Fox, and NBC; older ones from CBS; plus the “Seinfeld” library.  Some of the cable programming on Hulu includes MTV, Comedy Central, and Nickelodeon.  Like Netflix, Hulu also has original content like “The Path” and “The Handmaid’s Tale.”  Hulu has teamed up with the music service Spotify to offer a combined bundle to college students for just $5 per month.  Hulu is $6 – $12 per month.

Hulu With Live TV, which is now live, offers about 60 channels, including the major broadcast channels—ABC, CBS, Fox, and NBC—albeit only in a handful of markets right now. You also get cable channels such as A&E, the Cartoon Network, CNN, Discovery, Disney, Fox News, FX, HGTV, TBS, and TNT, among others. The lineup includes CBS Sports, ESPN, and Fox Sports, plus some regional sports networks.  Hulu With Live TV is now available on most Roku streaming players and all Roku TVs, as well as many LG and Samsung smart TVs. It is also supported on Amazon Fire TV devices, Apple TV, Google Chromecast, PlayStation and Xbox game consoles, and Android and iOS mobile devices. Hulu is now supported by Amazon’s Alexa digital voice assistant, so you can use voice commands on Alexa-powered devices to watch shows on Hulu.  Hulu With Live TV is $45 per month.

Netflix is still the king of streaming services.  It has a huge library of movies and TV shows plus a ton of original content and several deals with networks and producers for exclusive content– all at an affordable price.  You’ll find old shows, new shows, Australian and British shows, classic movies, hit movies, western s, reality TV, and everything in between.  If you want more than one stream available at a time, or if you want to stream in HD or 4K, you have to purchase more than just the basic plan.  If you are new to streaming, Netflix is a great place to start.  With its low price of entry (and typical 30 day trial), compatibility on every streaming device available and wide selection of programming, Netflix often fits the bill for those looking for alternatives to their current TV setup.  The only downside is that Netflix does not publish their available content, so the only way to see if they’ve got what you want is to try it.  Netflix is $9 – $16 per month.

Similar to HBO Now, if you like Showtime but don’t want to keep cable or satellite, Showtime’s streaming service could be for you.  You get the entire library of Showtime’s movies at your command, plus original shows such as “Billions,” “Homeland,” and “The Affair.” If you subscribe to Showtime through your cable provider, Showtime Anytime lets you watch Showtime fare on your phone, tablet, and other devices.  Showtime is $9 – $11 per month.

Sling TV, which is owned by Dish Network, is also setup more like a traditional TV service in that you don’t get individual shows; you get channels. They offer an Orange package, with about 30 channels, and a Blue package, with about 30 channels.  You can combine them for a discounted rate and there are extra channel packs you can add for even more channels.  If you want a similar array of channels to cable or satellite, your monthly cost will be one of the highest among streaming services.  Sling TV is supported by many devices, including Amazon Fire TV, Android TV devices, Apple TV, Roku and Roku TV, and Xbox One.  You can even opt for a $100 AirTV box that combines Sling TV channels and free over-the-air broadcasts in one device.  Sling is $25 – $40 per month + any add-on packs.

Like HBO and Showtime, you can now get Starz without a pay-TV subscription. Content includes such shows as “Outlander” and “Power,” plus movies, including “Star Wars: The Force Awakens.”  Starz also gives you access to its entire library of content so you can watch movies “on demand.”  Starz is $9 per month.

WatchTVEverywhere is a subscription that is included with TCC Cable, so if you are looking to cut the cord, this isn’t an option for you.  But for people who plan to keep their Cable subscription, this opens a whole new avenue of opportunity by allowing them to watch while they are away from home or on different TVs in their home (e.g. TVs without cable boxes).  They can also watch old episodes on demand or even give their code to their college-age kids or use at their cabin to avoid a second TV subscription.  WatchTVEverywhere offers over 70 cable channels through a website/app interface.  When you pick a channel to watch from the website or by opening the channel app, you have a choice of watching Live TV or choosing a show, series, and episode and watch on demand.  WatchTVeverywhere also offers streaming coverage of the Olympics and the NCAA Division 1 Men’s Basketball Tournament.  WatchTVEverywhere is FREE With TCC Cable.

YouTube is best known as a website/app for watching how-to videos, movie clips, funny home videos and much more.  There wasn’t much for “TV” content available.  But now, with YouTube TV, you have access to more than 70 networks, including all the major local networks.  Up to three users can watch simultaneously and you get a cloud DVR so you can record programs and watch them later.  YouTube TV has a nice selection of channels, including AMC, Bravo, Discovery, Disney, ESPN, FX, Fox News, Fox Sports, HGTV, MSNBC, National Geographic, Turner, USA, and some regional sports networks. You also get access to the original programming on YouTube Red, usually $10 per month. Showtime, Starz, and a few other channels can be added for an additional fee.  YouTube TV is $50 per month.